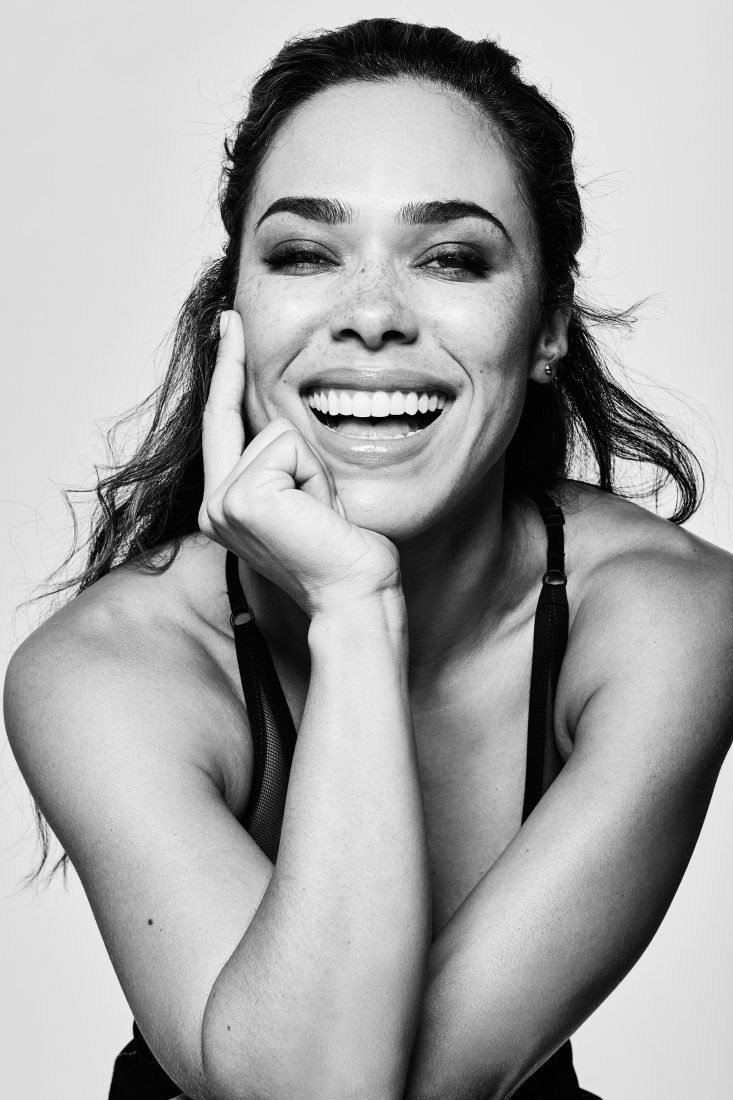 Jessica Camacho has always had an inclination towards justice. She even considered a career in law before becoming an actress. She enjoyed the idea of fighting for what is just, something larger than herself. That makes her new roles, as LA County Public Defender Emily Lopez in CBS‘s All Rise and Police Officer ‘Pirate Jenny’ in HBO‘s Watchmen, particularly compelling.

Both shows ask compelling questions about the criminal justice system, and about the responsibility each person has to do what is right–whether or not that thing is backed up by the law. Camacho herself holds strong convictions, though she doesn’t see those convictions as political. “There are things that I just know are right,” she tells me, “that is like the pursuit of freedom, the pursuit of fairness. We all want to be treated with respect. To have a shot at a life and providing for ourselves, for our family. We all want to be free from violence. That, to me, is the hard line.”

Downtown: What excited you about All Rise?

Jessica Camacho: I get to play this incredible human being who is committed to justice in a very clear and true way. I got to really understand and explore what it is to be a public defender. That particular line of work is so heavy and burdened by the knowledge that so many lives are reliant upon the public defender as their last line of defense. The clients often have nothing and are in situations that are so dire. They are trusting in this human being to help them have a shot at the rest of their lives. I get to play somebody who is committed to something so much greater than themselves. I was very honored.

DT: Did you have an interest in the legal system before this role?

JC: Before I became an actor, before I even knew that acting would be a part of my life, I thought about going into law. It’s something that always interested me. It fascinated me: fighting on the right side of things, fighting for something bigger than yourself. I was always moved by that.

The problem was that I could never decide if I wanted to be a prosecutor or a defense attorney. I was not very good at making decisions, so I’m like, I might not be the best lawyer. I see the gray a lot of times. I’m not a person that is more apt to see things in black and white. So it was just like, “I don’t know if this is the right pursuit for me.” And then pretty soon after that, I discovered acting.

DT: Were there any issues in All Rise that were particularly close to you?

JC: I think the thing that’s closest to me in my personal life is Emily’s struggle with relationships. But also I know that the topics that we explore in All Rise–as a human being, as an American–a lot of those really resonate with me, hit home with me. So I often find myself being really, really stirred emotionally by the things that we’re exploring on the show.

DT: Did you read Watchmen or seen the movie before you, uh, audition to be part of Watchman?

JC: I had seen the movie. As I was auditioning, I started to read through the original graphic novel and I was blown away. It was dark and it was stirring and it was uncomfortable. It was talking about real fears and real anxieties, and the paranoia and the darkness within us.

So that’s when I kinda realized like, “Oh, this is special, this is really special. This is like a different kind of look at life through the lens of the comic filter. This is something different.” So, yeah, it was very exciting.

DT: In addition to Watchmen, you were also on The Flash. Why do you think superhero shows are so popular right now?

JC: (Superheroes) speak to the possibility, the potential within us. I think as human beings, we feel limited in our lives. We feel the separation between how we want to see ourselves and how we actually see ourselves. I think the fascination with superheroes, it kind of picks up where our limitations leave us and there’s something beautiful and there’s something freeing about that.

But I think in terms of Watchman, I think this is the perfect time for Watchman because, with the constant stream of news and updates that technology brings us, we’re blown away by how much war, darkness, fighting, racism, and fear there is in the world. I think we want even our fantasies, even our heroes, to reflect what we’re experiencing as human beings.

When you see Watchman it’s like, Oh shit, this is not shying away from ugliness. This is not shying away from the horrible parts of American history. This is actually digging straight into that. Like, let’s address it so we can stop hating. Let’s address this. Then we can stop pretending that this is not at the core of us right now because we need to heal from it. And wounds need air to heal. I think it’s actually a really positive and beautiful thing that we’re starting to present things that are of the darker nature of us because I think it means that we want to heal.

JC: Right now, we just found out that uh, all rise is getting a full season, so we’ll be shooting until about March. I think we’re just all kind of like, “Cool, all right, let’s buckle down. Let’s make this, let’s combine our efforts and make a really beautiful piece of work.” So that’s what’s on my agenda. I’m excited to see what comes next. I’m bubbling over with passion and energy. I love what I do. I am so, so excited to show up for it, to show up for every project that I get to do, and I’m just excited to see what comes next.