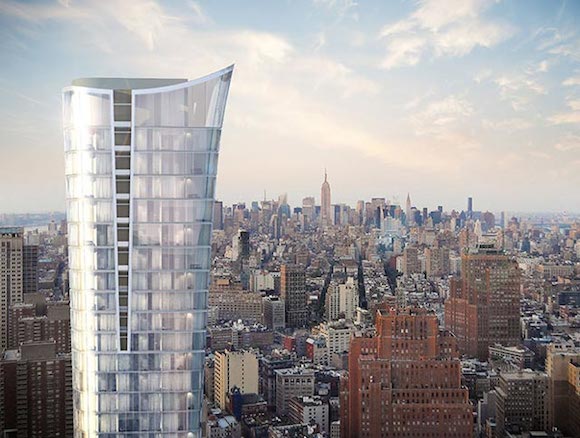 New York is a city known for its buildings that seemingly touch the sky. In an era where people are constantly trying to grow financially, why would the real-estate world be any different? What better way to stand out than to be the one in charge of the future tallest skyscraper in Tribeca?

The first filings are up for 101 Murray Street located in Tribeca and the information lists Goldstein Hill & West as the architect and Fisher Brothers as the developer.

The permits show that the building might boast a height of 857 feet, which is lower than the figures attached to the renderings. Numbers normally represent the height to the highest occupied floor and not the roof which could account for the discrepancy. The building will have around 365,162 square feet of residential space and the area will be split by 139 residences. If you do the math this translates into an average per unit of around 2,500 square feet.

Kohn Pedersen Fox will be designing the building and the tower’s actual height is likely to be closer to 950 feet. The 62 story building will have a flute-like appearance and floors 55-58 will have one unit apiece. Approximately the top four floors of the skyscraper will be used for mechanical space.

The old St. John’s building that currently resides at the location is already in the process of being demolished. No information about the financing of the project has been released, but the building is being referred to and announced as 101 Tribeca. Many similar projects are already underway at 30 Park Place, 56 Leonard, and 50 West, however it seems that 101 Murray Street will be the tallest of them all.

Stay tuned as more buildings begin to touch the sky in Lower Manhattan. Downtown is clearly becoming the place to be.